This visit comes at a time when, for five years, there had not been a working visit by a high-level Burundian authority to this institution.

On the sidelines of this visit, the Minister Ambassador Albert Shingiro met, in Brussels, Mr. André Flahaut, Minister of State, Honorary President of the Belgian Chamber of Representatives in the Belgian Federal Parliament and former Minister of Defense. Their meeting was dominated by the situation in Burundi with a particular emphasis on new positive developments in the country, the regional situation, as well as the state of bilateral relations with the Kingdom of Belgium and Burundi. 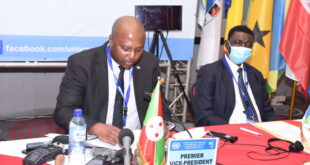