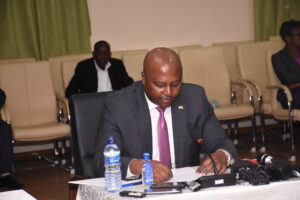 In his word of welcome, His Excellency Ambassador Albert SHINGIRO reaffirmed the firm will of the burundian Government by looking back to the statement of His Excellency the President of the Republic, on the occasion of the exchange of New Year greetings with the diplomatic and consular corps cited as follows: “Our hobbyhorse is dialogue with Burundi’s bilateral and multilateral partners so that past disputes are emptied”.

The Minister of Foreign Affairs and Development Cooperation has indicated that his will is to move forward with the firm determination to achieve warming and the normalization of relations with the European Union and with individual Member States. Our shared duty is to further cement our relations and bring them to the highest possible level for the benefit of our respective peoples, he said.

The Delegate of the European Union in Burundi, H.E. Ambassador Claude BOCHU, for his part welcomed this process of dialogue.

In a press release made public after the discussions, the two Parties recalled that Burundi and the Member States of the European Union are historical partners keen to see their ties of friendship and cooperation develop further in a spirit of trust and mutual respect for the benefit of their respective peoples. 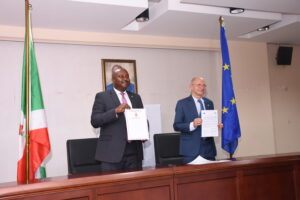 According to this press release, the two Parties further exchanged on matters of common interest and mutual commitments as part of the normalization of their relations of friendship and cooperation. The resumption of political dialogue is a shared priority that will benefit the Burundian and European peoples.

The two parties welcomed the excellent constructive climate which led their discussions and agreed to continue them with a view to producing concrete results as soon as possible.

SPEECH OF HIS EXCELLENCY AMBASSADOR ALBERT SHINGIRO, MINISTER OF FOREIGN AFFAIRS AND DEVELOPMENT COOPERATION ON THE OPENING OF INFORMATION AND EXCHANGE SEMINAR FOR NEWLY APPOINTED DIPLOMATS.