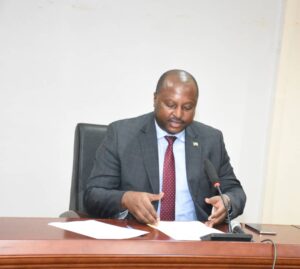 This Friday, August 28, 2020, His Excellency the Minister of Foreign Affairs and Development Cooperation Ambassador Albert SHINGIRO held a contact meeting for the Representatives of Foreign Non-Governmental Organizations registered in Burundi.

In his remarks, His Excellency the Minister welcomed the Representatives of foreign NGOs while thanking them for their availability at this meeting. He noted to the audience that Burundi is peaceful and that the priorities of the Government of Burundi are focused on economic development, in particular with the National Development Program (PND) 2018-2027, and that Burundi is open to beneficial mutual partnership.

He then invited Representatives of foreign NGOs to comply with national laws in general, and the law governing foreign NGOs in Burundi, in particular. He also urged them to align with the priorities of the Government of Burundi and asked them to assure that their activities have a real impact on the well-being of the population. He also stressed that foreign NGOs who do not comply with the legal framework will have to cease their activities on Burundian territory.

He did not fail to thank all the foreign NGOs who have contributed to the fight against the Covid-19 pandemic in Burundi. He took the opportunity to reiterate the full commitment of the Government of Burundi, and in particular that of the Ministry of Foreign Affairs and Cooperation, to support the efforts of foreign NGOs.

The Representative of foreign NGOs member of RESO, Mr. Marcellin KASH, also spoke. He thanked His Excellency the Minister for making contact with the Representatives foreign NGOs. He took the opportunity to raise questions relating to the operation of the one-stop shop for foreign NGOs, and the opening of the Melchior NDADAYE International Airport.

By providing some answers to these questions, His Excellency the Minister said that the single window will allow the Ministry of Foreign Affairs and Development Cooperation and foreign NGOs to save time and thus work efficiently. Regarding the opening of the Melchior NDADAYE international airport, he observed that given the health crisis, a 3-month campaign was launched by His Excellency the President of the Republic of Burundi to fight against the Covid-19, and that it will be at the end of this campaign that the question will be evaluated according to the results that will be obtained.

Participation of H.E the President of the Republic in the 75th Session of the United Nations General Assembly

Vacancies at the UN-Habitat

Visit to Burundi of the Minister of State, Minister of Foreign Affairs of the Democratic Republic of Congo

On Monday October 5, 2020, the Minister of Foreign Affairs and Development Cooperation of the …